So normally I would not give two hoots about this tournament but this year it’s really going to be special. I sure am glad none of these coaches have an ego to stroke. A lot of teams will just say no when they are snubbed from the NCAA tournament but one of my favorite teams this season (Oakland) has said yes to the Vegas 16 Tournament in Las Vegas. If I had the time to travel over there I totally would and go watch my favorite player Kay Felder take on some half decent prospects. He averages 24.2 points, 4.1 rebounds, and 9.3 assists per game practically make it a double-double. I thought he should be given the Wooden award but doubt that will ever happen at a school like Oakland. You are probably thinking that Oakland University is in the State of California…or maybe that it has to do with that Weed school (which is actually called Oaksterdam). If you aren’t from Michigan, you might not consider that it’s actually located in the suburbs of Detroit and also located in Oakland County. They recruit some of the best talent out of Detroit and actually play about 5 minutes from the Palace at Auburn Hills (Detroit Pistons arena). Anyways this guy: 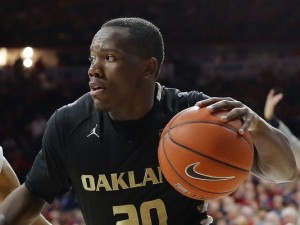 He is Allen Iverson reincarnated. No joke. His numbers are definitely elite but my guess is you would talk about how his school really does not play much of anyone. Well they we head of Michigan State 50-37 at half time, it ended up going to overtime where they lost but Felder dropped 37 on those guys. That was after he scored 38 in their win against Washington. The little dude (standing at just 5 foot 9 inches) can straight up ball. He may not end up being a superstar in the NBA but he will be making waves next season as Oakland brings in two new shooting guards to back him up in Chris Palombizio and Brailen Neely.  He should have no issues in a tournament though and it will be interesting to see how he ends up next season.  Here is the schedule for the Vegas 16 Tournament in Las Vegas, Nevada:

All times are Eastern.

This site uses Akismet to reduce spam. Learn how your comment data is processed.